The Model 206 Announcer's Console offers a unique combination of analog and digital audio resources for use in broadcast sports, eSports, live event, entertainment, and streaming broadcast applications. The unit is housed in a compact, rugged steel enclosure that's intended for table-top use. Calling the Model 206 "cute" or "cool" would be accurate; its nicely proportioned but diminutive size makes it ideal for use in space-constrained locations. The Model 206 supports Dante® audio-over-Ethernet digital media technology with AES67 compatibility for integration into contemporary applications. The unit is extremely simple to deploy, is "pro" quality throughout, and provides an intuitive user experience. The Model 206's audio quality is excellent, with low distortion, low noise, and ample headroom. Careful circuit design and rugged components ensure long, reliable operation.

The Model 206 integrates directly into both Dante audio-over-Ethernet and standard analog audio environments. With just a Power-over-Ethernet (PoE) connection, a microphone, and a pair of headphones or an earpiece, a complete broadcast on-air position can be created. And by using the Model 206's microphone output a direct connection to an analog microphone-level input on an associated camera, remote I/O interface, or audio console can be supported. Two remote control inputs allow external switches or contact closures to activate the main and talkback button functions. One of the inputs can also be configured to provide a low-voltage DC "tally" output that follows the state of the main output.

Model 206 operating features are configured using the STcontroller personal computer software application. An extensive set of parameters allows the unit's functions to be tailored to meet the needs of many applications. STcontroller is a fast and simple means of confirming and revising the unit's operating parameters.

The Model 206 on its own can provide an "all-Dante" solution for one on-air talent location. A wide range of applications can be supported, including sports and entertainment TV and radio events, streaming broadcasts, corporate and government AV installations, and post-production facilities. The unit's small size makes it ideal for live-sports applications, such as basketball, where physical space for personnel is very limited. Four Dante receiver (audio input) channels supply the user with their talent cue (IFB) signals. Should the cue signal be "mix-minus" an integrated sidetone function can provide the user with a microphone confidence signal. Four Dante audio output channels, one designated as main and three named talkback, are routed via an associated local-area network (LAN) to inputs on Dante-compatible devices. Four pushbutton switches, main and three talkback, provide the user with direct control over audio routing. The audio switching is performed in the digital domain and is virtually "click-free."

By providing the main audio signal in two forms, Dante digital audio and analog microphone level, the Model 206 makes integration into a wide range of on-air environments easy to accomplish. And with the three talkback audio channels available as Dante output channels, routing to inputs on a variety of devices, such as matrix intercom systems, audio consoles, and monitor loudspeaker systems, is simple and flexible.

Some applications may benefit from not utilizing the Model 206's Dante main output channel. This typically won't be an issue of inadequate audio quality but rather a need to match work-flow requirements. For example, for lip-sync or transmission purposes it may be optimal to have the on-air audio transported as an embedded signal along with the associated camera video. Alternately, all on-air audio sources may need to connect to inputs on an audio console or console-related I/O unit. Supporting these scenarios is not a problem as the Model 206 supplies a microphone output connection that's specifically intended for this purpose. Simply connect the unit's microphone output connection to the desired analog input, such as the mic/line input on an ENG-style camera—that's it!

Set up, configuration, and operation of the Model 206 is simple. An etherCON® RJ45 jack is used to interconnect with a standard twisted-pair Ethernet port associated with a PoE-enabled network switch. This connection provides both power and bidirectional digital audio. A broadcast headset or handheld ("stick") microphone can be directly connected to the unit's 3-pin XLR mic input connector. The input is compatible with dynamic or condenser microphones. The integrated P48 phantom power source provides support for a wide range of condenser microphones. A 3-pin XLR microphone output connector provides a "direct mic out" function for integration with microphone inputs on related devices. Stereo headphones, the headphone connections from a stereo or monaural headset, or even a monaural earpiece can be connected to the phones output jack.

The user is presented with four pushbutton switches and three push-in/push-out rotary level potentiometers This makes it easy to control the status of the main and talkback outputs as well as adjusting the signals that are sent to the headphone channels.

The Model 206 connects to a local area network (LAN) by way of a standard 100 Mb/s twisted-pair Ethernet interface. The physical 100BASE-TX interconnection is made by way of a Neutrik® etherCON RJ45 connector. While compatible with standard RJ45 plugs, etherCON allows a ruggedized and locking interconnection for harsh or high-reliability environments.

The Model 206's operating power is provided by way of the Ethernet interface using the 802.3af Power-over-Ethernet (PoE) standard. This allows fast and efficient interconnection with the associated data network. To support PoE power management, the Model 206's PoE interface enumerates (reports) to the power sourcing equipment (PSE) that it's a class 2 (low power) device. If a PoE-enabled Ethernet port can't be provided by the associated Ethernet switch a low-cost PoE midspan power injector can be utilized.

Audio data is sent to and received from the Model 206 using the Dante audio-over-Ethernet media networking technology. As a Dante-compliant device, the Model 206's four Dante transmitter (audio output) channels and four Dante receiver (audio input) channels can be assigned (routed or "subscribed") to other devices using the Dante Controller software application. The Dante transmitter and receiver channels are limited to supporting four Dante flows, two in each direction. The digital audio's bit depth is up to 24 with a sampling rate of 44.1 or 48 kHz. Two bi-color LEDs provide an indication of the Dante connection status. An additional LED displays the status of the associated Ethernet connection.

The Model 206's audio performance is completely "pro." A low-noise, wide dynamic-range microphone preamplifier and associated voltage-controlled-amplifier (VCA) dynamics controller (compressor) ensures that mic input audio quality is preserved while minimizing the chance of signal overload. The output of the microphone preamp and compressor is routed to an analog-to-digital conversion (ADC) section that supports sampling rates of 44.1 and 48 kHz with a bit depth of up to 24. The audio signal, now in the digital domain, routes through a 32-bit microprocessor and then on to the Dante interface section where it is packetized and prepared for transport over Ethernet.

Audio input signals arrive via the four Dante receiver channels and pass into the Model 206's microprocessor. The supported sampling rates are 44.1 and 48 kHz with a bit depth of up to 24. Channel routing, headphone level control, and sidetone creation are performed within the digital domain. This provides flexibility, allows precise control, and keeps the three level potentiometers from having to directly handle analog audio signals. The audio channels destined for the phones outputs are sent to a high-performance digital-to-analog converter and on to robust driver circuitry. High signal levels can be provided to a variety of headsets, headphones, and earpieces.

The Model 206 can be configured to meet the needs of specific applications and user preferences. All configuration choices are performed using the STcontroller personal computer software application. There are no mechanical switch settings or button-press sequences required to configure how the unit functions. Selectable parameters include microphone preamplifier gain, P48 phantom power on/off, button operation, remote control inputs (included tally output), headphone output mode, sidetone operation, and overall unit operation. The gain of the microphone preamplifier can be selected from among four choices. This allows the Model 206 to match the output sensitivity of a range of handheld and headset-associated microphones. A low-noise source of P48 phantom power can be enabled if required to support condenser (capacitor) microphones.

The main and talkback pushbutton switches can be individually configured. The main button can be selected to operate from among four modes while the talkback buttons can be selected from among three. These choices allow the Model 206's operation to be tailored to meet the specific needs of many applications. As an example, for on-air sports applications the main button would typically be configured to provide a push to mute (cough) function. The microphone signal on the Dante main output channel and the microphone output connector would remain active unless the talent needs to momentarily disable it. The talkback buttons would most likely be set to their push to talk modes as their use would be intermittent.

The audio sources and the way in which they are assigned to the headphone output channels can be configured from among five choices. These unique choices allow almost any required headphone monitoring situation to be implemented. Whether for use in on-air sports, an awards show broadcast, or as a production support tool, the Model 206 should be able to achieve the desired configuration.

Following the mode number is an abbreviated description of what signal or signals are assigned to the three potentiometers (pots) and on to the two headphone output channels. The potentiometers are labeled, from left to right, A, B, and C. The format would equate to Mode x – pot A/pot B/pot C where x equals the mode number.

The integrated sidetone function can be configured to operate from among four choices. This allows audio associated with the microphone input and microphone preamplifier to be returned to the headphone output. This is important as different applications may provide a "full mix" or a "mix-minus" talent cue signal. If a full mix cue signal is provided then sidetone audio will not be needed and the function can be disabled. In the case where a mix-minus signal is present, providing the user with sidetone at the appropriate time(s) can be an important means of confirming the signal that's coming from the connected microphone.

The headphone gain range configuration helps to provide an optimized audio level to Model 206 users. The appropriate setting will depend on the specific audio sources provided to the unit as well as user preference.

Three system modes select the overall way in which the Model 206 functions. The on-air mode is optimized for applications where users will be on-air talent that must maintain strict separation between on-air and production audio channels. Other applications will benefit from the two available production modes.

The Model 206 was designed so that its capabilities and performance can be enhanced in the future. A USB connector, located on the unit's main circuit board (underneath the unit's cover), allows the application firmware (embedded software) to be updated using a USB flash drive.

The Model 206 uses the Audinate Ultimo™ integrated circuit to implement the Dante interface. The firmware in this integrated circuit can be updated via the Ethernet connection, helping to ensure that its capabilities remain up to date.

Remote Control Inputs: 2
Function: configurable, can mimic the action of the main and talkback button functions
Type: active low, 1 mA maximum, input pulled up to 3.3 volts DC via 3.4 k ohm resistors
Limitation: Remote Control Input 1 shares hardware pin with Main Out Tally (only one function can be configured to be active at a time)

Main Out Tally:
Functions: follows the status of the main output
Type: active high, 3.3 volts DC in series with 142 ohm resistor (23 mA maximum)
Limitation: Main Out Tally shares hardware pin with Remote Control Input 1 (only one function can be configured to be active at a time) 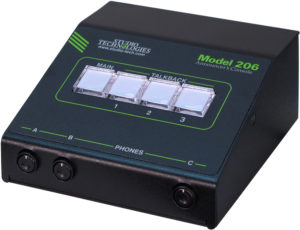